The production method linked to the peasant tradition

The production method of the Frantoio Pace Extra Virgin Olive Oil is linked to the peasant tradition together with some adaptations resulting from the long experience and constant search for a higher quality, from picking to pressing, from packaging to preservation. During such phases, in fact, the workers’ technical qualifications and the ethical principles as well as the technical equipments in use are of paramount importance. 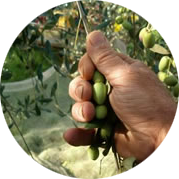 Special care is required when olives are carried from the fields to the olive oil millstone. There, they are ground within 24 hours so as to avoid any kind of degradation and/or fermentation which might cause an acidity rise and oil imperfections. 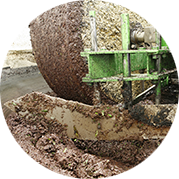 is made using the so called “molazza”
Now olives are ready to be pressed under the ‘molazza’, a machine equipped with two granite stone wheels which grind the olives so as to obtain a smooth paste.

This method avoids traumatic stresses and overheating, restrains the formation of emulsions and protects the paste from metal contamination.

Find more about our olive mill. 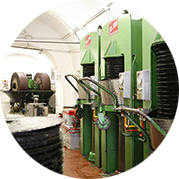 leads to the final separation of three components of the paste

Once the olive paste is obtained, extraction follows, leading to the final separation of pomace, oil and vegetable water. The oil is obtained by the traditional method of hydraulic presses. The paste obtained by the pressing is blended during the kneading process, and then, by means of a dispenser, it is spread on disks (pressing mats), which are stacked on top of each other and then placed into the press.


The Pressing phase takes place to a maximum of 350 kg/cm. Its result is water and oil (the so called oliomosto/ olive must), and the olive pomace which is a mixture of cellulose fibres. The must, stored in tanks, is ready for the next step, separation, made by centrifugation. The oil is separated from its vegetable water (later used as a fertilizer in agriculture), whereas the oil pomace is removed from the pressing mats and put into tanks to be sent to other facilities where the pomace is used to extract a lower quality oil. 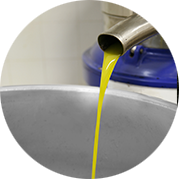 The last stage consists in filtering the still “unrefined” oil, using a filter called ‘Barese’ which eliminates the small sediment particles using traditional cotton filters, thus avoiding the formation of dregs which might spoil the taste and the flavour of the oil.

Our extra virgin oil is extracted and produced through the cold pressing process so that the oil natural properties are preserved. Doing this, our customers can enjoy the unique, rich experience of a real olive juice. 100 kilos of olives can produce approximately 15-18 kilos of oil, 35 kilos of oil residue and 50 kilos of vegetable water.

Find more about the quality.